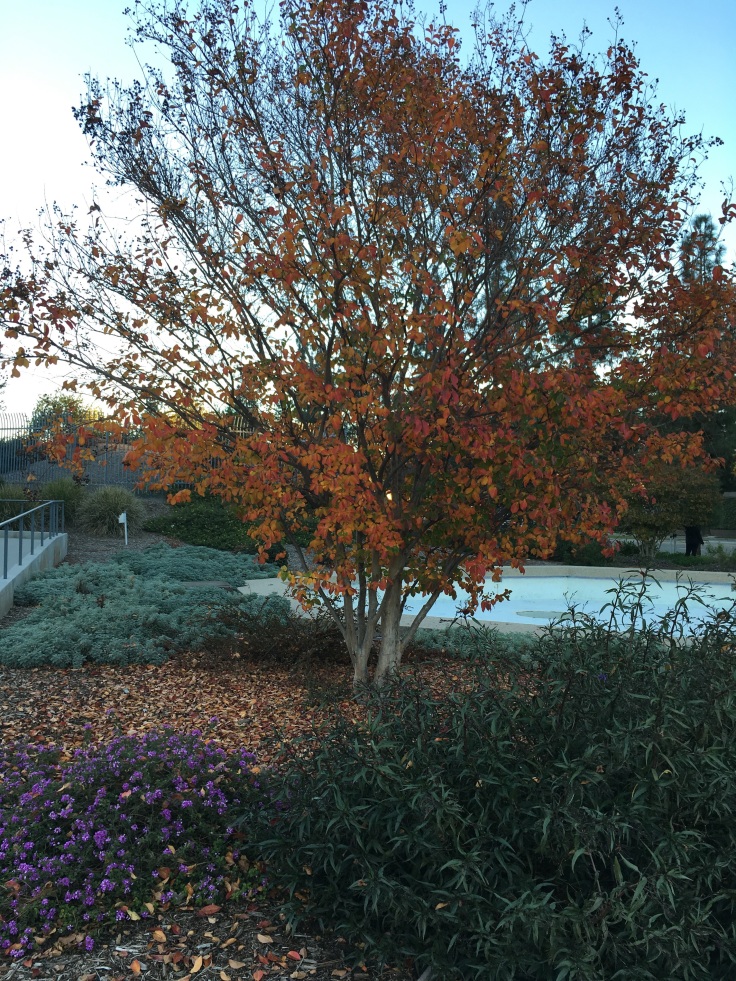 Proof that our leaves here do change colors, contrary to popular myth. There are trees, of course, that do not change, but there are those that do. This is outside my work. In the background is a pond, or the remnants of one. They drained it a few years back which is a big shame. Ducks and geese use to hang out there and it was fun. Now only smokers hang around the area, and that is not fun.

M’s aunt’s husband died last night. 21 years they’d been together. A little more than a week ago he became very ill and they put him in the hospital for pneumonia. Lately he had been also complaining of lower back pain. While in the hospital they did a scan and discovered he had stage 4 kidney cancer. This was very rapidly moving throughout his body and the tumor and cancerous cells had attached to an artery. His aunt seemed to recall that he had a scan earlier in the year (he was a very heavy man with some other health issues over the years) and there was nothing then, indicating this had been a very aggressive cancer. Basically the doctors spoke of chemotherapy but they couldn’t really operate because of weakness and where it was, but then they changed their tune to weeks to live. He ultimately decided he wanted no treatment and to go home for his last few weeks of life with hospice care. He came home Tuesday and passed away last night. So he didn’t even last weeks. It all went very fast.

We never really got along with him, but he was a nice enough guy and he made her happy, so we are very sad for her. She lives in another state and we hate that she has to pretty much deal with this on her own. He had a son from a previous marriage who lives with them but he has developmental issues and now he is dependent on her. And I suppose in a way, she is on him, too.

Over the next few days, I intend to finish Trashing the Tree to my satisfaction. I don’t anticipate updating anything else until after Christmas, which will be My Heart’s a Virgin, when I do.

I’ll be posting here over the next few days so I won’t give you my holiday wishes until then, but I couldn’t resist the above picture.

Thank you my friends who read here.