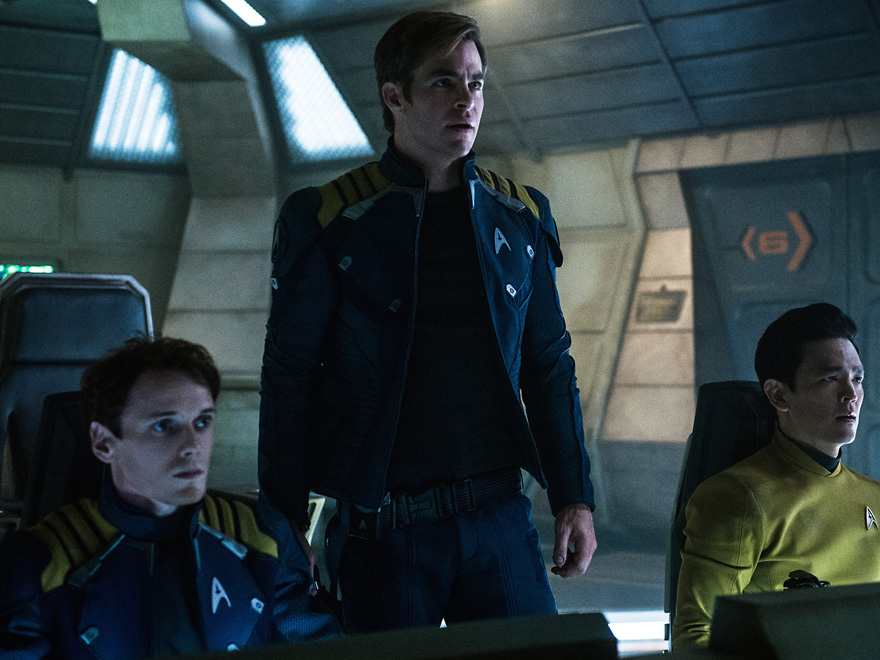 I’m trying this again, a fan fiction site separate from the one I use on AO3. For now I’m not widely advertising it while I see what I do with it.

I’m posting a work in progress that takes place after Star Trek Beyond, called Where My Demons Hide.

I’ll probably post photos and stuff that inspire me. Right now I’m fixated on a picture of Zachary Quinto in the snow that I just have to use for Spock.

“This is all Spock’s fault,” Bones grumbled as he was chained to a rock wall next to me. He rattled the chains when he shook his hands.

I blew out a long breath, making a whistling noise through my nose. “Yes. Your constant haranguing of  Spock is getting on my last nerve, Bones. I don’t know why you can’t get along with him, but you give me a damn headache. Spock tried to prevent this whole mess and if it’s anybody’s fault—”

There was a loud splashing sound then, like a foot hitting a puddle in the stones that lead to where McCoy and I had been chained. The beat of my heart picked up as I realized this could be it.

After all the Klingons that had chained us here hinted at some creature that would be hungry from Human flesh. I thought it was all Klingon bluster and I hoped I was not wrong.

And a moment later my first officer came into view. It took him only a short time to undo my chains and as my boots hit the solid ground I glanced toward Bones as Spock approached to let him out of the restraints.

“You sure you want to do that, Spock?” But I smiled to show Bones I was teasing.

“Har har,” Bones muttered as Spock got him out of the chains. “Thanks.”

Spock arched a brow but said nothing in response to Bones’ somewhat sour show of gratitude.

“The beam out location is this way,” Spock said and led the way.

As we followed after him, Bones stopped me with a hand on my arm. “Listen, Jim, about what I said back there. I was cranky and feeling—”

Bones nodded. I hadn’t even told him that my relationship with Spock had been changing. There were some things that were better left private. At least for the time being.

Spock handed me my communicator. I smiled at him and flipped it open. “Scotty, beam us up!”

Here’s What I Have Decided

I’ve decided to make the next chapter of The Mysterious One the last chapter. I’m working on it. I began this work in 2018, so I feel it’s time. I will be leaving them with what is called a Happily For Now ending.

Fear not, though, this is not the end of my silver-eyed Jim and his “lionheart” warrior, Spock (see the song King and Lionheart as well as a Spirk video to it) and their offspring.

I am making it the “Supernatural Jim Kirk” series and The Mysterious One is part one. I will be writing more of their journey in part two. I will say in honesty that will not premiere until 2023.

And if you never read that one for whatever reason, you’ll at least have the ending of this one.

So there you have it.

I’ve tested negative for almost a week now and I feel good. (Good for a geezer anyway).

This weekend I am off again to a special dinner and overnight trip Saturday for M’s birthday. It’s a little early as it’s at the end of the month but sister and I will be in Vegas for the convention then so we are doing an early celebration. M is staying home with Luna!

In other news, I am so so so busy at work I think my brains are leaking out. It’s stressing me out. I have ants in my bathroom looking for water (with so many states in drought who isn’t), I’ve been trying to lose weight again, and we’re still trying to have a family barbecue (postponed when M and I got Covid) sometime in September.

Ayi yi. At least my August flashes are done and scheduled!

And in keeping with the monthly theme

“I think this is it this time.”

Jim eyed his best friend as they leaned against rocks. They were stranded, there was no doubt about that. The shuttle they had taken to get to this godforsaken location on this damn rock had exploded and was beyond repair.

“ I don’t know why you say that,” Jim said, grimacing in pain.

He was pretty sure a bone was sticking out of his leg. He didn’t want to look. Bones’ arm was in a sling they’d made.

“No transportation, communicators not working to contact the ship, we’re the only survivors of the mission party.” Bones snorted. “Such as we are. I don’t know how it could get any worse.”

When he didn’t continue, Bones, surprisingly, didn’t push him to.

Jim wasn’t even sure what he intended to say.   Like Bones he was feeling a little hopeless and it was getting harder to maintain optimism.

He leaned his head against the rock and closed his eyes.

He wanted to be rescued more than anything. In exactly two weeks he was supposed to go to New Vulcan with Spock and be formally bonded. It looked like now that was never going to happen.

And wow that was depressing. He could feel tears begin to sting his eyes. Just what he needed.

He forced them away somewhat angrily and was about to try to start some kind of conversation with Bones when the growling started.

The hairs on the nape of his neck went up.

Was that his imagination?

“Hear what?” Bones demanded, not quietly.

“Shh. I think some creature’s stalking us!”

Just then a huge white creature with a horn on his head came into their vision. It howled menacingly and started toward them.

“You just had to ask how it could get worse,” Jim complained as he attempted to scramble to his feet.

Jim looked at him, incredulous. “So I should stay here and let him eat me?”

The creature sped up then, like at a run to reach them just as Jim heard the sound of a familiar low whine of transportation.

And then just like that, his view of the creature with the horn on his head was replaced with a view of Spock standing in front of the transporter, hands calmly clenched behind his back, Scotty there at the controls.

“Spock!” And Jim fell to the ground just as Spock went to help him.

Coming to an AO3 Update Near You

Time marches on and so do expectations.

My next writing adventure (chapter) will be Our So-Called Life. When last we left our intrepid T’hy’la pair Spock was off to Starfleet Academy, leaving Jim once more behind.

And soon enough I am going to be skipping right ahead three years to Jim being an adult and joining Spock there. I haven’t decided whether to have one more chapter at 15 or skip ahead to Jim going there.

I’m at 37 chapters and I think 40 might be a good place to stop and it would be nice to have three chapters of them both as adults. But it’s not like there’s a rule that says I can’t do 41.

But that might be a few days as I am understandably behind at work and life in general.

Look for that next though!

And as the sergeant used to say at the end of every Hillstreet Blues (old show), “Let’s Be Careful Out There.”

For anyone wondering I seem to be on the mend

I stayed out of work today too but plan to return tomorrow, Wednesday

My nose skin is dried out and cracked but not as stuffed so that’s a win. I have no real appetited (I can taste and smell fine) so I’ve lost a few pounds, My throat is still sore. But for the most part I am definitely improved.

We’ve hit another month, folks, and a new theme/pattern.

Every Monday for August you can expect our intrepid Spirk team to be facing some sort of mission peril. That’s Mondays only for August flashes (there could always be an extra or two)

Spock shot him a look. “May I remind you that I suggested you stay onboard the Enterprise for this mission.”

Jim snorted. “Even if I said no, you can’t, you know you would.”

“Perhaps.” Spock coughed. “The smoke is getting to be a bit much.”

Jim dared to look down to see the flames licking ever closer to where they were hogtied to a giant contraption that kept dropping lower and closer to the fire that was supposed to, er, theoretically, end their lives.

“I think I saw this is a movie once.”

“Only once?” Spock scoffed. “I’ve seen it myself more times.”

“It’s definitely overplayed.” Jim shifted in the ropes, trying to reach his communicator which he had thoughtlessly shoved into the back pocket of his regulation uniform pants. “Go ahead and say it.”

“What am I supposed to say?”

“This is another fine mess you’ve gotten us into, Captain.”

“There is nothing fine about this. Your trousers are too tight.”

Jim moaned as he tried to maneuver his arm. “Damn that hurts. If I don’t get to this thing soon my pants will be burned right off me.”

“Chances are more likely that the material of the pants will stick to your burned flesh.”

“What are you doing?”

“I saw this guy dislocate his shoulder once so he could get out of a binding.”

“You saw this yourself?”

“Now, don’t say that.” Jim shrugged, wrangled, and scooted. Finally his aching arm slipped from the knot and his hand into the pocket. He got it open too. “Kirk to Enterprise. Scotty, beam us up now!”

With a splat he and Spock landed on the transporter, free of the contraption, but not their binds.

“Jim!” McCoy came rushing toward them.

A Heart Needs a Second Chance (the title of the cheating Jim story, it’s a line from 38 Special’s Second Chance) is going live. I already wrote it so it only required me to fix a few errors so I thought now’s a good time to post it